I had just finished reading Erin Entrada Kelly’s beautifully written book Lalani of the Distant Sea when I got a text from my sister about an assignment her fifth grader had just completed:

He has to write an argumentative essay that names a word of the year, and then defend it. He chose “altercation.” And then wrote paragraphs about mass shootings, everyone fighting about global warming, the potential war with Iran, and immigration. Imagine at 10 years old, the word you think best describes the world is altercation.

My dreamy thoughts from Lalani quickly came to a halt as I considered this. My sensitive nephew’s world view is just so different from what I remember mine being at age 10. While I could name the current president (Ronald Reagan), my primary troubles were saving enough money for more stickers for my sticker album or wondering if Friday’s episode of Full House would be a rerun.

It’s not always feasible to offer our children opportunities to escape the current events of both their immediate world and the larger, global world.

But books can be that temporary vacation from reality and offer us (adults and children alike) a much needed respite from the constant barrage of pain and suffering.

Whole worlds are awaiting us between the covers of books. As a long-time advocate of realistic fiction as a tool to develop empathy and understanding, I’ve recently found myself drawn more to fantasy. It’s like my brain and my heart simply need to disconnect from our reality from time to time. 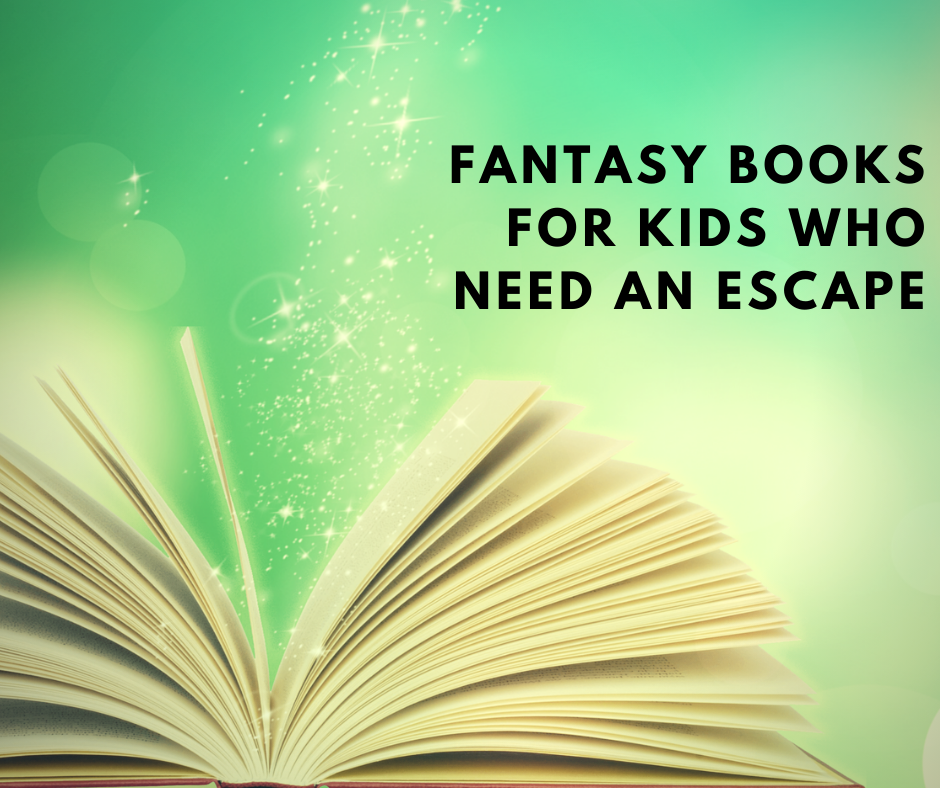 The Miraculous Journey of Edward Tulane by Kate DiCamillo

Princess Pink and the Land of Fake-Believe series by Noah Z. Jones

Lalani of the Distant Sea by Erin Entrada Kelly

The Tale of Desperaux by Kate DiCamillo

The Girl Who Drank the Moon by Kelly Barnhill

The Land of Stories series by Chris Colfer

Any series by Rick Riordan

Fantasy books or series for Young Adult (YA):

Stardust and Fortunately, the Milk by Neil Gaiman

It’s not that fantasy is problem-free. It’s just that they aren’t exactly like our current problems, and so that alone feels like an escape. When the good character wins in the end, it seems easier to believe that it’s possible for that to happen in the real world, too.

These books can fill us with hope at a time when hope seems in short supply.

In Lalani of the Distant Sea, Lalani overcomes a series of physical and mental challenges away from her village, while unknowingly providing the spark for change against oppression back home. Sounds like the type of uplifting story your ten-year-old should be filling his head with, right?

We want our children to grow up to be engaged, informed citizens. It’s important that they not be shielded from current events and what’s happening in the world around them completely. But reality in 2020 is heavy, and we all need that weight removed from our shoulders occasionally, even if it’s just for the time it takes us to cozy up and read a good book.